In this blog post, Jill Florent details her extensive experience of the evolution of ELT publishing – from process to product and working relationships. 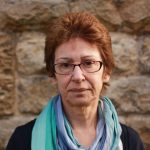 Manuscripts, typewriters and paste-ups
Since my publishing career began in the late 1970s, I’ve seen a lot of changes: changes to the processes, the products and the relationships. Laborious manual processes have given way to streamlined digital ones. Courses used to have four components at each level, all in black and white: Students’ book, Workbook, Teacher’s book, tapes. In the 1990s cassettes morphed into CDs attached to the book cover, and photocopiable materials were an added extra. At the beginning of the 21st century, websites introduced more novelties, and LMS platforms more interactive components. Author/publisher interactions have changed from mainly face-to-face meetings and correspondence by letter to Skype meetings and correspondence by email. What’s been gained by innovation and what’s been lost?

In the beginning …
Between school and university, I learned to touch-type on a manual typewriter, but by the time I started work as a temp, typewriters were usually electric, or golf ball machines (changing the ball gave a different typeface). I was never the best touch-typist, so correction fluid was essential, but it was visible and looked ugly in a letter.

In publishing, life was less hierarchical than I expected – everyone, including the MD, was on first-name terms. Nevertheless, when authors visited they were VIPs, given tea in china cups and taken out to lunch.

In the late 1970s, manuscripts were still occasionally just that – written by hand! These were, thankfully, sent out to professional typists. Even so, a change of mind meant laborious retyping, so revisions would be typed separately and stuck on. Scissors, glue stick, pencil and ruler were all essential tools. We learnt to cut ‘close to the text’, and our fingers were always sticky. The terms cut and paste are still used in digital programs.

Maybe it was this hands-on approach that made everybody think they were designers. One early MS came in the form of a book. The text was typed and stuck in place. Where it took up more space than the authors estimated the printed text would need, little flaps were folded in. Magazine pictures showed the type and placing of illustrations. Although the final result was close to the authors’ original, this approach was a nightmare to edit and process.

Amstrad and the advent of word processing
Compared to an electric typewriter, the Amstrad word processor was a big leap forward. It had a keyboard, a screen and a printer. Inserting text or making corrections was easy. You could add instructions (<<italic>> … <<italic>>) and the text in between would print as instructed. The printer had a daisy wheel, which, like the golf ball, could be exchanged to get a different typeface.

With the advent of word processors, some keen editors thought they could become typesetters. One editor-turned-author-cum-packager offered to supply camera-ready copy for the printer to convert into film. She submitted copy with Amstrad codes included and thought that was job done. As a book, that would have looked very strange, so off to the typesetter it went. Amstrads were very useful for authors and reduced the number of pasted-on corrections, but typesetters were safe for a few more years. There was a lot of discussion about whether producing MS on disks rather than on paper should entitle authors to higher royalties – but the standard remained 10 per cent and has decreased rather than increased.

From hot metal to phototypesetting
When I first visited a typesetter, hot metal (so called because the letters were formed from molten lead) was the default option. However, they were beginning to experiment with phototypesetting. Our guide sucked his teeth and said, ‘It’ll never catch on, you just don’t get the quality.’

Typesetting produced galley proofs – the text set to the correct column width in long strips. The editor’s job was to read and mark up the galleys in different colours because the typesetter was responsible for the cost of correcting their (red pen) errors, and the publishing house was responsible for editorial (blue pen) changes. Once the galleys were correct, it was the designer’s turn with the scissors and paste to turn them into page proofs with spaces for pictures and suitable breaks. Page make-up was still a laborious process.

One-stage colour printing
Before the late 1980s/early 1990s, to print a book in colour, each page had to go through the press four times, for yellow, cyan, magenta and black. It took skill to get the page exactly positioned for each pass through the press, and even a tiny fraction out would give a fuzzy ‘out of register’ result. The introduction of the colour press was a marvel – blank paper went in and full colour pages came out. The combination of colours could be adjusted and the result stored on computer to ensure that reprints matched the first edition. This made the process faster and cheaper, and Students’ books moved into colour. When full colour could be printed in one pass through the press, the half-way house of two-colour printing was no longer a saving.

The first bite of the Apple
In 1990, our first office Macintosh computer arrived. It had a tiny screen and was shared by all the editors. It was mainly used for typing letters. We kept our work on ‘floppy disks’, which were neither floppy nor disks. The real power of the Mac was yet to come. At this stage, the big advantage was the WYSIWYG (what-you-see-is-what-you-get) screen. Authors invested in Macs and eventually editors all had their own computers. However, we were still using printed dictionaries and reference books and marking up paper proofs. Photo libraries sent prints or transparencies; on a shoot, the photographer would take some test Polaroids, and then shoot reels and reels of film. We’d look at the results later on a light box to choose the final images. Audio was on cassettes, a transition stage between reel-to-reel tapes and CDs. Printing from digital files was just starting, and film would soon be obsolete. The 1990s were an era of great change, and it was mainly positive – writing, editing and designing were all becoming less laborious and more integrated. A process that once involved many stages and people with different areas of expertise was streamlined as editors worked directly on the author’s typescript, submitted by email, and ‘tagged’ or styled the final MS for the designer – no typesetter involved.

The millennium
As we approached the year 2000, the Millennium Bug was the big spider-in-the-bath. If computers weren’t Y2K compliant, planes would fall out of the sky, infrastructure would collapse and all data would be lost. A lot of money and time was spent by governments and businesses to avert these disasters. As 1999 became 2000, there were no newsworthy disasters, but whether this was because the bug was never a serious problem, or because the IT guys performed miracles, remains a matter of dispute.

Around the millennium, although the scissors and glue sticks were gathering dust in the drawer, the much heralded ‘paperless office’ generated more paper than ever, because we printed everything out. It was common for authors to attach their copy to an email, only for the editor to print it out and mark it on paper before making corrections to the digital copy. Page proofs would also be printed. This was partly because the screens we had were not big enough to view a whole page. Now, editors generally read and mark everything on screen.

Process, product and working relationships
Over my working lifetime, the stages of the publishing process have telescoped into each other or been eliminated, so the whole process is much faster. What was a series of discrete stages – writing, editing, typesetting, reading galley proofs, preparing page proofs, camera-ready copy, film and printing – has become a more seamless process with authors, editors, designers, photographers and illustrators all working digitally and sharing material online.

The materials have also changed: the four-component courses have become multi-component, with additional apps and links. Black and white has given way to colour. Photocopiable materials (introduced when schools moved on from mimeograph machines) have been superseded by digital and online materials. Cassettes, a great improvement on reel-to-reel tapes, were bettered by CDs, and then by integrated audio. The process is faster, easier and cheaper, and the product is glossy and attractive. I certainly wouldn’t recommend a return to the days of snail-mail, scissors and paste, but despite the exciting potential, in reality digital material is often dull, limited to just a few activity types.

In spite of all these advances, editors and authors have both suffered an element of de-skilling. The author–publisher relationship has changed markedly. Publishers require more control in order to reuse content in different formats, so they retain the copyright. Authors, downgraded to ‘content providers’, are no longer asked to develop their vision for a course. They are given strict briefs and templates to work to. They are paid fees rather than royalties, and they are not encouraged to invest creativity in the project, merely to produce material. Fewer editors work in-house and attend regular training courses, with the result that they are less able to shape and develop manuscripts. Quality and innovation have given way to speed and predictability. Computers have made the process easier and faster but not more interesting or rewarding.

Jill Florent is a freelance ELT editor and writer living in Oxford. She has also trained editors and contributed to editorial procedures guides. She developed the Macmillan Books for Teachers with Adrian Underhill and has edited several Teacher’s Handbooks for Helbling Languages. She has managed major coursebook series for Macmillan, Pearson and OUP.

What’s your opinion of the ‘digital revolution’? Do you think it has made your working life easier or more complicated?

The MaWSIG blog features guest posts by members – please get in touch if you would like to write for us.