Our latest blog post is by Ken Wilson, who shares his thoughts on how the ELT materials writing world has changed over the last few decades. The MaWSIG blog features guest posts by members – please get in touch if you would like to write for us. 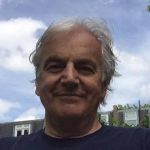 I’ve been involved in English language teaching since 1968, when I left university and went to teach for a year at the Instituto Británico in Seville, Spain, and I’ve been a published ELT author since 1971, when Longman, as Pearson was then called, released a vinyl album of songs I had written for my students at International House, London.

To this day, I have no idea how anyone was supposed to use a vinyl album in the classroom but it sold a lot of copies and propelled me into the whole business of materials production.

Since then, I’ve written and published about thirty ELT titles. To begin with, there were more collections of songs, a couple of readers and some drama-related material, including sketches that I wrote for the English Teaching Theatre.**

Eventually, in about 1990, I got my first chance to join a team which had been assembled to write a series of course books. It was to be the first of more than a dozen series that I co-authored or wrote by myself.

I’ve stopped writing new course material now. My main reasons being (a) the whole process involves a skill-set and awareness of digital and online possibilities which I’m not really equipped to deal with; and (b) I don’t think someone as old as me has the first idea about discourse between young people who are struggling to add speaking English to their list of life skills. And whatever else the course material contains, it really needs authentic speaking exchanges between people of the age that the book is aimed at.

So what I have to say about ELT publishing comes from my partly obsolete experience and, if you like, from a position of impartial overview. Some of what I can see from this faux-lofty position is very fresh and exciting. Other things alarm me greatly.

Let me start with the alarming stuff.

The first thing that bothers me is how prescriptive the major UK publishers of ELT materials are. If you are lucky enough to be asked to write course material, you will almost certainly be given a great swathe of data about the content the publisher expects, based on market research which may or may not be that accurate. Market research that consists of ticking boxes in an online survey is never that accurate.

With one project I worked on a few years ago, we were even given the titles of the modules we had to write. When I asked if we could change the titles to make them … well, frankly more interesting, the answer was ‘no’.

Secondly, the chances of pitching a course book idea, an ‘unsolicited manuscript’, to a major UK publisher and getting it published these days is zero.

It’s worth bearing in mind that Headway, the most successful English language teaching course of all time, was an unsolicited manuscript. Authors Liz and John Soars wrote just an Intermediate level and offered it to a number of different publishers before Oxford University Press took a punt on it and asked them to produce an Upper Intermediate level as well. The two books were published at the same time in 1986.

The partial release of a course like this would never happen these days. New courses may be four or five levels, but they must all appear at the same time. This usually means that there will be a team of authors working on different levels simultaneously. There will be no chance to release one or two levels to see how teachers and students react to them, and possibly incorporate feedback into later levels.

And another alarming thing: in my day (cue violin music), course books generated royalties for the authors. There was no question about that. It seemed only right and proper that the publisher and the author (or team) would have a mutual investment in the successful outcome of the project.

Nowadays, writers might expect to be offered a fee to write one book in a series. Given that a successful course book will make a significant amount of money for the publishers, the end of royalties in favour of fees too often represents a move backwards in the publisher−author relationship.

I don’t want to leave on such a pessimistic note, so let’s consider the nicer question. What appears to be ‘fresh and exciting’ about the world of ELT publishing?

I will let someone else write about the great opportunities provided by technology in materials production, which I find both fascinating and just a little scary.

Having dissed major publishers in my earlier remarks, I will simply sing the praises of the various smaller publishers who are operating in ELT today. If you go to the book exhibition at a big ELT conference like IATEFL, you will see the smaller operators at their modest booths, surrounded by the books they have produced. If you really want to get into writing materials AND have some control over what you write, these are the people you should contact. The proprietors are often people who worked for the main ELT publishers and left because they had a bunch of good ideas about books to produce which the big operators weren’t interested in.

Writing for the small publishers will not make you rich, but it should give you more control over what you can produce.

Finally, a nod towards two unusual organisations who are trying to help writers get published. First of all, the round (they prefer all lower case for the title), which is ‘an independent collective of creative individuals in English language teaching’. Lindsay Clandfield and Luke Meddings are the brains behind the round. Check out their raison d’être here. And finally, check out Dorothy Zemach at Wayzgoose Press for more innovative ideas about getting published.

The big publishers aren’t all bad, of course, so let me finish by asking this question: what advantages are there to a publisher-led prescriptive system to generate new course material?

** The English Teaching Theatre was a company that toured the world doing stage shows for learners of English. You can find out more here.

Ken Wilson is a writer and has trained teachers in forty countries. He has written more than thirty ELT titles, including a dozen series of course books. His most recent courses are Smart Choice Third Edition (Oxford University Press), and Achievers (Richmond). He has also written ELT radio and TV programmes, sketches, songs and drama resources. Ken is currently editor-in-chief of an ELT primary course for Vietnam, a joint production between Macmillan Hong Kong and VEPH Hanoi. In 2016, he completed an MA in Creative Writing at Birkbeck College. He blogs at https://kenwilsonelt.wordpress.com/.

11 thoughts on “In my day, things were different! An old buffer* writes …”