In the second of our posts covering the MaWSIG-LitSIG joint Pre-Conference Event in Liverpool on 1 April 2019, David Crystal explains why for him, language and literature are not opposites but in fact two sides of the same coin. 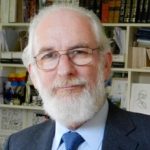 For me, the enjoyment and study of language and the enjoyment and study of literature are inseparable. They are two sides of a wafer-thin coin. Historically, though, we often find the two domains separated, using a ‘distancing’ conjunction: language and/but/or literature. I have been in institutions where the language and literature departments don’t ever talk to each other, which is such a shame, as both sides are missing out. Prepositions are a better way of expressing the relationship. The choice is yours: language in/for/through/with … literature. My favourite is @, as in [email protected] Or [email protected] The absence of spaces is deliberate.

I find this potential integration best captured by a remark of Robert Graves, who once said that ‘a poet has to master the rules of English grammar before he attempts to bend or break them’. Generalizing: poets, novelists, dramatists – and all literary writers – have to master the rules of English (or any language’s) grammar (vocabulary, pronunciation, orthography, discourse …) before they attempt to bend or break them. It is the bending and breaking of rules that brings the two domains together, especially in teaching. The language teacher knows the rules, but may not be aware of how these rules can be broken to create literary effect; the literature teacher knows how authors present us with wonderful linguistic effects, but may now know how to describe exactly what they have done with language in order to achieve them.

In my talk, I gave some examples of the way rules can be bent and broken. I used Henry Reed’s poem ‘Naming of parts’ to illustrate how a basic phonetic principle – when we are talking, we speak in a single ‘voice’ – can be broken in order to show the two ‘voices’ that are present in the poem. I used an extract from the interrogation scene in Harold Pinter’s The Birthday Party to show how a basic principle of grammar – that we ask each other questions which are answerable – can be broken in order to create an atmosphere of threat and menace. I read John Kitching’s poem Sunday Words to throw some light on how literary phonaesthetics can be illuminated by an analysis of the sound structure of a poem. An extract from Tom Stoppard’s Rosencrantz and Guildenstern are Dead illustrated how an everyday piece of language play –– the game of ‘Questions’ (carrying on a conversation in which each participant is allowed only to ask a question) – can appear without change in a clearly literary context. And I ended with an illustration of how a branch of linguistics – historical phonology – can be applied to literary settings in the form of productions of plays by Shakespeare and others in ‘original pronunciation’.

References
There’s further discussion of these examples in the third edition of my Cambridge Encyclopedia of the English Language (2019).
Original pronunciation can also be further explored at www.originalpronunciation.com.
Another example of language/literature integration can be found at www.shakespeareswords.com.

David Crystal works from his home in Holyhead, North Wales, as a writer, lecturer and broadcaster, and is honorary professor of linguistics at the University of Bangor. He is the author of many books and articles on linguistics and English language studies: a complete listing can be seen online at www.davidcrystal.com. He became IATEFL’s patron in 1994, following a year as its honorary president.