Our series on writing ELT materials for different markets around the world now takes us to Spain, where Amanda McLoughlin shares her experiences. 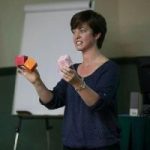 I came to Spain almost 20 years ago as a recently qualified and very naïve EFL teacher and settled in the cold and rainy north. Eventually, through knowing the right people (which is how most job offers are made here), I was offered a job on an intensive immersion course in a local primary school, where each class spent a week doing activities in English. I was told I would be teaching science, geography and art and craft. Back then, I knew next to nothing about teaching subjects through a second language, but I’ve always been a fast learner. From my experience of the enthusiasm and motivation the children invariably brought to those lessons, I became convinced that teaching ELT through the medium of other subjects was rather a good idea. The children were motivated by the content of the lessons, which was much more meaningful for them. English became a by-product and the kids really felt they were working on something concrete and useful.

So I began to read up on CLIL (Content and Language Integrated Learning for those of you to whom the acronym is not familiar). Around about this time I began to give talks at conferences, and I spoke mainly about CLIL as it was taking off in Spanish schools at the time. The Spanish government had started pushing schools to offer subjects in English to try to raise their ranking for English levels on league tables such as those produced by the Organization for Economic Co-operation and Development (OECD).

Before long, a publisher (Richmond Santillana) approached me with an offer to write a CLIL coursebook for a fee. The book was to be a primary natural sciences textbook aimed at six-to-seven year olds studying science in English in Spain.

The international publishers see Spain as an important market because schoolchildren have to buy all their school books each year, and there are private and state-owned language academies on practically every street corner. English is a compulsory subject at school, and over a million school children study one or more other subjects (mainly science, PE, music and art) in English. B1 certification helps secure a place at university, and many universities offer subjects taught in English, too. After the 2008 recession, where unemployment in Spain was at more than 20 per cent, having a good level of English was considered essential if you were looking for work.

So, the market for both EFL and CLIL coursebooks in Spain is fairly important. That said, as I mentioned before, Spain is chock-a-block full of qualified and experienced teachers who, like me years ago, dream of being able to leave the classroom behind to write a best-selling coursebook and retire to a sunny island somewhere. The publishing world, like other fields, works very much on word of mouth here. Once your name becomes familiar, you will get approached. That first coursebook I wrote led to offers from another Spanish publisher, Vicens Vives, and then to a big, royalties-based contract for OUP; this came about because someone I worked with at Vicens Vives was made redundant and then got a job with OUP and recommended me.

Since that big contract with OUP, they have kept me in more or less continual employment with activity books, unit tests, extension worksheets, teachers’ books, articles, teachers’ guides and new editions, which is fantastic. On the downside, however, the CLIL market is very limited. The books I write are written for the Spanish curriculum, and so are not suitable for schools in other countries. So I find myself typecast to some extent as a CLIL writer.

If you are thinking of moving to sunny Spain to pursue a career as a writer, my first piece of advice would be to make sure you choose a sunny place to settle down in! Secondly, get your name out there. You absolutely must be on the conference circuit; that’s where you’ll meet the publishers, and by giving talks your name will become familiar to the right people. That goes for knowing other writers, too. I have picked up work that was initially offered to another writer who either didn’t want to or couldn’t take it on, and who then suggested me to the publisher in question. And finally, to work as a writer in Spain, you will be better placed to pick up work if you know how the education system works here. Having a good enough level of Spanish to understand the national curriculum, to communicate with the members of the editing team who don’t speak English, and to write artwork briefs and describe page layout to the non-English speaking layout and design team is a definite plus.

There are opportunities in Spain, and the market is robust, so I would say if you think the Spanish writing scene may be for you, go for it!

I’d like to thank the Spain-based members of the ELT Writers Connected Facebook group for their comments and suggestions, which helped me put this post together.

Amanda McLoughlin is a freelance teacher trainer and materials writer based in the north of Spain. She taught EFL and science for 8 years and has been training teachers for the British Council for the last 12 years, specialising in CLIL and EFL methodology. More recently, she has been working as an author of primary and secondary CLIL and EFL textbooks.

One thought on “Living and writing in Spain”