On Friday, 18 June 2021, MaWSIG held its 2021 IATEFL Pre-Conference Event online. We were very happy to be able to offer a great line-up of presentations and networking events, and to welcome participants from around the world. 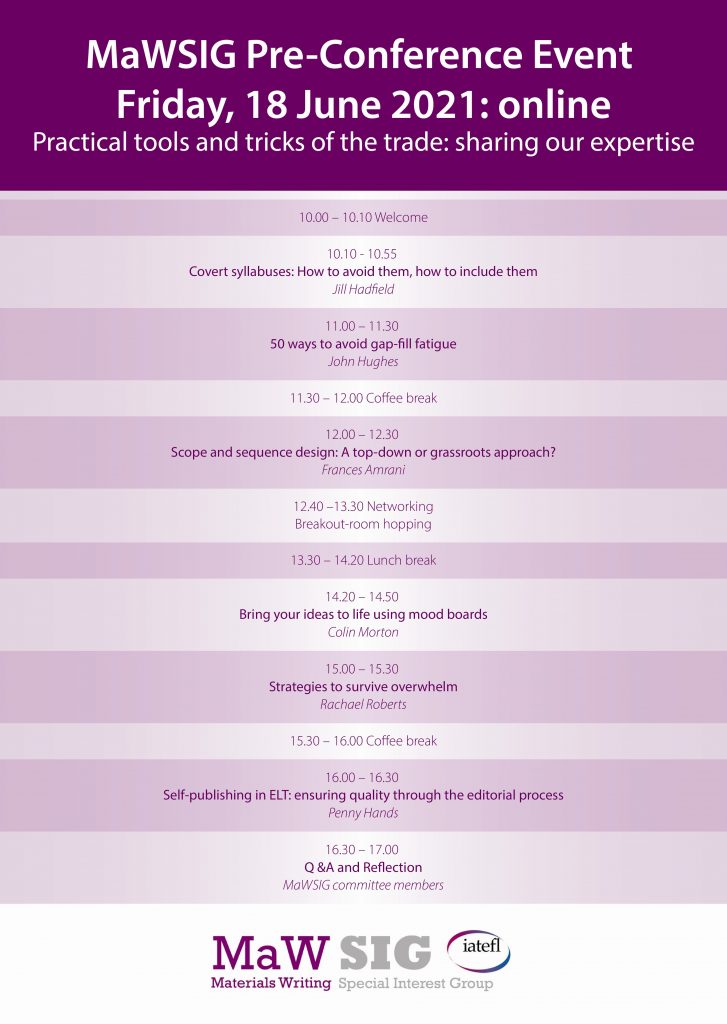 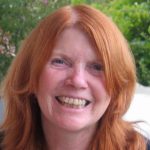 The first session of the day was a presentation by Jill Hadfield on covert syllabuses. We want to give special thanks to Jill for taking part from Auckland, New Zealand with a 12-hour time difference, meaning that she was presenting at 9 p.m. local time.

Here is a brief summary of her presentation:

The term covert syllabus, also known as a hidden curriculum, is defined as ‘the unwritten, unofficial, and often unintended lessons, values, and perspectives that students learn in school’ (Great Schools Partnership, 2014). It usually has a negative connotation; in ELT materials, this could mean, for example, unconsciously sexist or racist materials. Some older textbooks contain stereotypes, for example:

Covert syllabuses mostly seem to stem from a lack of inclusion: a lack of women in an image of a boardroom, for example, or a lack of cultural diversity. Sometimes they spring from unconscious over-inclusion, from the materials writer’s ‘core energies’. This is my term for the particular forces that drive a writer and give colour to their writing, but that also cause their writing to show a bias towards certain types of activity (Hadfield, 2014). These energies can, of course, be positive in themselves, leading the writer to design creative and engaging activities; however, the writer should be careful that their own bias does not lead to an over-reliance on any one kind of activity.

Covert syllabuses do not have to be negative. I first used this term in a positive sense in my book Classroom Dynamics (Hadfield, 1993), using it to refer to activities which have an overt language learning aim but a kind of ‘secret’ group dynamic aim tucked inside the language learning aim. This ‘secret’ aim is invisible to the student, and is thus non-overt, meaning that the teacher does not say to the students, ‘Now we are going to do an activity which will help you empathise with other group members’. Instead, they present an activity which overtly practises, say, the present simple, but they teach it in a way that encourages empathy. This could entail asking students to work with a partner and complete a questionnaire as if they were their partner (see ‘I Am You’ from Classroom Dynamics).

Since then, I have expanded my use of positive covert syllabuses – in materials written for Motivating Learning (Hadfield, 2014) – to include, for example, an L2 identity-building syllabus. This syllabus can co-exist with the overt language learning syllabus throughout a course. The idea is based on research by Bonny Norton and Tan Bee Tin showing that creative activities increase students’ sense of empowerment and contribute to L2 identity. I would argue, therefore, that inclusion of creative activities such as writing and drama should be part of a positive covert syllabus, written in by the author. For example, in Motivating Learning, rather than proposing analytic activities, I designed a rap creation activity to heighten awareness of language learning strategies and a film scene creation activity to get students thinking about possible obstacles to learning. These creative tasks can help the learner build a stronger sense of L2 identity.

Why should such syllabuses – a group-dynamic-building syllabus and an identity-building syllabus – be covert? Well, these syllabuses are rarely, if ever, included in course syllabuses, so will not form part of the overt course aims. Further, these processes are affective, not cognitive; therefore, they operate best at an affective, non-explicit level. Indeed, it would rather undermine the activity if they were made overt, with the teacher saying, for example, ‘Now we are going to do an activity which will increase your cohesion as a group’, or ‘This activity will help to build your second language identity’.

My final question was: How can we avoid a negative covert agenda and also build in a positive group agenda? My suggestions for this included various checklists and self-evaluation procedures. For example, the checklist for avoiding negative covert syllabuses focused on avoiding various undesirable agendas but also on being aware of your own unconscious bias when designing activities.

Jill Hadfield has worked as a teacher and teacher trainer in Britain, France, China, Tibet, Madagascar and New Zealand, run short courses and seminars for teachers in many other parts of the world and worked as consultant for the UK’s British Council and Department of International Development, writing materials for and reviewing aid projects in Africa. She has written over thirty books for teachers, including the Communication Games series, Classroom Dynamics and the Oxford Basics series. These have been translated into a total of 17 languages. She has also written two travel books: Watching The Dragon and A Winter in Tibet, and a novel, Postcards from Babel. Her latest book, Interaction Online, co-authored with Lindsay Clandfield, was short-listed for both the Ben Warren Prize and the ELTons Awards for Innovation in Teacher Resources.